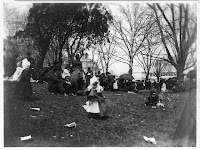 Cracking eggs competition in 1836 New York, a White House Egg Roll of 1874, and English Monday egg games in early 1800 are detailed.  Eggs have been decorated for centuries, with some intricate or memorable examples "preserved very carefully in the corner-cupboard ; each egg being the occupant of a deep, long-stemmed ale-glass...


...through which the inscription [one segment contained the name and age of the child recieving the egg] could be read without removing it." [The Every Day Book, William Hone. London: 1826]

The eggs which were plainly decorated were made or bought for use on the Monday after Easter.  Boys would play games such as tossing an egg, egg rolling or holding the egg encased in their hand and hitting the end of the egg held by another.  The egg which cracked would be given to the winner.  Occasionally someone would cheat and use a wooden or marble egg.  Years ago my sons, now 25 and 26, had their own game after the Easter egg hunt... throwing the eggs at each other.

The White House Easter Egg Roll, going on this morning, follows the Easter Monday tradition.  The last quote, below, recalled a roll event on the Capitol grass, generally closed to the public, where over 5,000 attended, since Washington, D.C. schools closed on that day.

In New-York, eggs, died or stained with a variety of colours, are displayed for sale on Easter-Monday, by grocers, hucksters, fruiterers, and other venders of edible refreshments. These are called paas-eggs, or pasch-eggs.

We cannot find that the custom of cracking eggs on Easter-Monday, as practised in New-York and some other parts of the United States, by the descendants of the Dutch settlers, is known among other nations. The game (if it be one) is played in the following manner :—

Both parties, we will suppose, are prepared for the contest, being already "supplied with the munitions of war ;" say, a dozen eggs each, carefully selected and scientifically tested, by striking the huits and points (the big and little ends, against the front teeth, in order to be certain that the shells are hard, strong, thick, stout, and if possible,"uncrackable." The challenger then encloses an egg in one of his hands, so that no part of it is visible except the point (or butt, as the conditions maybe), which does not protrude above the horizontal level of the circling thumb and fingers, but remains some distance below it, generally supported beneath by the palm of the other hand. Holding it m this manner, he challenges his antagonist to hit it with the point or butt of another egg. The shell of one of them must, of course, yield to the force of the concussion, and the cracked egg becomes the prize of the victor. In this manner, hundreds of eggs are lost and won in a short time ; and as the slight injury which they receive does not lessen their intrinsic value, the winnings are of some account to the victors.

Artificial eggs, curiously made of wood, marble, and other hard substances, are frequently used with such address as completely to deceive the eye, and thus the unsuspecting party falls an easy prey to tho artifice of his antagonist, and finds himself suddenly stripped of his capital, and put hors du combat, without being able to account for the misfortune. But wo betide the juvenile sharper should the trick be detected ! The scene exhibited on a certain race-course, between a certain prince and another jockey, would here be repeated on a smaller scale. Ten to one but an attempt would be made to crack something harder than eggs.
Festivals, games, and amusements: ancient and modern. Horatio Smith. NY: 1836

At this day, the Easter eggs used in England are boiled hard in water containing a dye, so that they come out coloured. The boys take these eggs and make a kind of game, either by throwing [bowling] them to a distance on the green sward—he who throws oftenest without breaking his eggs being the victor— or hitting them against each other in their respective hands, in which case the owner of the hardiest or last surviving egg gains the day.
Chambers's Information for the people, William Chambers. Edinburgh: 1849

It will be readily supposed that the majority of pace eggs are simply dyed; or dotted with tallow to present a piebald or bird's-eye appearance. These are designed for the junior boys ... they are hurled to swift destruction. In the process of dying they are boiled pretty hard—so as to prevent inconvenience if crushed in the hand or the pocket. But the strength of the shell constitutes the chief glory of a pace egg, whose owner aspires only to the conquest of a rival youth. Holding his egg in his hand he challenges a companion to give blow for blow. One of the eggs is sure to be broken, and its shattered remains are the spoil of the conqueror: who is instantly invested with the title of " a cock of one, two, three," &c. in proportion as it may have fractured his antagonist's eggs in the conflict. A successful egg, in a contest with one which had previously gained honours, adds to its number the reckoning of its vanquished foe. An egg which is a "cock" of ten or a dozen, is frequently challenged. A modern pugilist would call this a set-to for the championship. Such on the borders of the Solway Frith were the youthful amusements of Easter Monday.
The Every Day Book, William Hone. London: 1826

THE most interesting part of the Easter festival for the children in Washington, and for many older people, too, is Easter Monday, when all the schools in the city are closed, and the little folks have leave to play on the grass in Capitol Park... It is the only day in all the year when they let people go on the grass.

Almost every one had Easter eggs — boiled hard and colored bright red, and crimson, and purple, and blue, and green, and brown, and many figured and covered with pictures, very pretty. They brought them in their hands, and in baskets, and some had as many as a dozen; and they at once commenced the game of rolling them down the grassy slopes, and when one got broken they would eat it. More and more children kept pouring in... and by noon there were more than five thousand, besides a great many grown people who came to look at them... They shouted and screamed and laughed, and chased each other, and rolled their eggs down the banks, and rolled down themselves after them.

Two high banks run around the Capitol building, one above the other, each about three times as high as a man, and as steep as the roof of a house; and the girls were running down and the boys rolling down those grassy banks all day long; and the number of tumbles they had could not be counted.

They have it so every year, and it is the same in the grounds around the President's house, and in the other parks. There must have been at least ten thousand tired and dirty children washed and put to bed in this city that Monday night; and it is feared that some of them were just a little cross. April 8, 1874.
Glimpses of places, and people, and things. Geo. C. Smithe. Mich: 1887