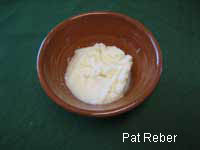 The large snowfalls (45") in the mid Atlantic area has caused a sudden popularity of Snow Cream recipes on the internet, and local news.  Below are historical receipts and my interpretation, which are delicious and simple to make.


Modern recipes use evaporated milk, sweetened condensed milk, cream, or even yogurt.  Another way to use snow in cooking is by making Snow Fritters and Snow Pancakes HERE

Elizabeth Ellicott Lea, born here in Ellicott City, Md., wrote her cookbook in 1845, and added to it in 1846 and 1851. The last edition stayed in print for 40 years, and I have met a few elderly ladies who used Domestic Cookery, published in Baltimore.  Her recipe appears to be the first ice cream version of Snow Cream.  Earlier recipes using that title were the froth from whipping cream and egg whites.

Snow Cream
Take the richest cream you can procure, season it with a few drops of essence of lemon, or syrup of lemon peel, and powdered white sugar, and if you choose a spoonful of preserve syrup, and just as you send it to table, stir in light newly fallen snow till it is nearly as stiff as ice cream.

Mix the wet ingredients until the sugar is dissolved. I prefer vanilla flavor  (as seen in later recipes) over the lemon.  Add a cup or scoop of snow and stir.  Keep adding snow until a firmer consistency.  If too much snow is added, and it doesn't hold together or too crystallized, add more sweetened milk. Eat immediately or store the Snow Cream in the freezer.

Snow Cream.—Mrs. M. A. H. Rowe, Columbia Co.,N.Y. says the following is quite equal to Ice cream. Beat thoroughly 1 egg with 1 cup white sugar, add 1 cup sweet cream, flavor to the taste, and stir in snow until it is quite stiff.
American Agriculturist, NY: 1862