For centuries cooks have used the gridiron as one way to prepare meat, fish, poultry, and vegetables. Hearth cooks often misuse the gridiron, treating it like our modern grill - such as basting causing smoke, keeping the bars black, and imprinting lines on the meat. Most modern cooks don’t use chalk. or paper ...


A good description of the use and care of gridirons for broiling can be found in The Cook's Own Book, Boston 1832, by Mrs. Lee, who copied a large portion from Kitchiner's The Cook's Oracle, 1822 [see below]. 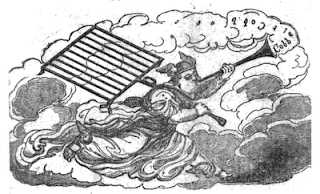 Shiny bars. Instead of keeping the entire gridiron black, the tops of the bars should be shiny metal. The bar tops must be kept 'bright' as there is "no good cause for the bars ever becoming black" [The Servant's Guide and Family Manual. 2d ed. London: 1831] if the tops are wiped while hot with a linen cloth.


Heat the gridiron first. "The gridiron should be hot through (which will take five minutes) before any thing is put on it. It must then be rubbed with a piece of fresh suet, to prevent the meat from being marked, or sticking to the hot bars; if for fish, chalk the bars. [The Servant's Guide and Family Manual. 2d ed. London: 1831]
Sticking and marking. Grease with lard for meat or chalk for fish to stop sticking and "to prevent the meat from being marked by the gridiron.” [The Cook's Own Book. Mrs. N.K.M. Lee. Boston: 1832]

Chalk for fish. Many authors through the 19th century instructed the reader to chalk the gridiron bars, and the Kentucky Housewife [1839] suggests "chalk or flour." "When in a hurry, dry and flour the fish, 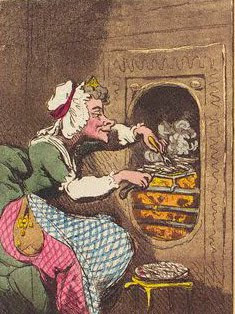 and chalk the gridiron; and when there is any disposition to stick, loosen them with a knife; turn them, rubbing the gridiron clean." [Domestic Economy, and Cookery, for Rich and Poor, by a lady. London: 1827]

In her receipt to broil Whitings, Sarah Harrison [The House-keeper's Pocket-book. 1739; Charles Carter, The London and Country Cook. 1749] made a "Note, The Chalk will keep the Fish from sticking." For broiling Cod, John Farley [The London Art of Cookery, 1787; and later Williams' The Accomplished Housekeeper, 1797] "Make a good clear fire, rub the gridiron with a piece of chalk, and set it high from the fire."

"It is better to have a gridiron expressly for fish, otherwise meat is often made to taste fishy." [Mrs. Bradley's Housekeeper's Guide. Cinn. & Phila: 1860]

Smoke was viewed as detrimental to the flavor of the food. Fires were to be brisk and clear. "When the fat smokes and blazes too much remove the gridiron for an instant, and just sprinkle the fire with a little salt. Arrange your gridiron, if possible, so that it may be from two to five inches above the fire and slightly inclined towards the cook." [Buckmaster's Cookery. London: 1874]

Hannah Glasse warned to "never baste any thing on the gridiron, for it only makes it smoked and burnt." [The Art of Cookery made Plain and Easy. London: 1784]

To lessen the dripping onto the coals and causing smoke, the gridiron should be slanted [as suggested by Lee and others, and seen in antique gridirons with shorter legs] or the bars "made concave, and terminate in a trough to catch the gravy and keep the fat, from dropping." [Kitchiner]

There were upright gridirons so the juice and fat would not drip on the coals and cause smoke. "It is cheap 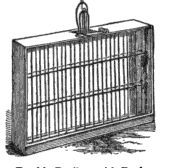 er in the end to buy a double hanging gridiron, and broil the steak in front of the fire, instead of on it. The gravy is caught in the little trough below, and thus is saved. [The Young Woman's Book. Laura Valentine London: 1878] However, Buckmaster wrote "Perpendicular gridirons are objectionable, because there is always a current of cold air on one side of the thing broiled."

The fire should extend somewhat beyond the edges of the gridiron, in order that the sides of the meat may be acted upon by the heat at the same time as that portion which is in more immediate contact with the fire. [Delicate Feasting. Theodore Child. NY: 1890]

Steak tongs or fingers were to be used when turning the meat, rather than a fork, so not to break the colagulated surface and cause the juices to run out. "Broil it quick, and turn it often, with steak-tongs, to keep in the gravy and make it a nice brown..." [The Complete Servant, by Samuel and Sarah Adams. London: 1826] "In this kind of cookery [broiling on gridiron] the object is to coagulate as quickly as possible all the albumen on the surface, and seal up the pores of the meat so as to keep in all the juices and flavour." [The Encyclopaedia Britannica. 1890] "In practical kitchen-work one is constantly reminded of the truth of the familiar saying that fingers were made before forks, and also before tongs." [Delicate Feasting. Theodore Child. NY 1890] But if a fork is used it "...must be stuck into the fat to turn them, or the gravy will run out. [The Young Woman's Book. Laura Valentine. London: 1878]

Paper on the Gridiron. A interesting method using paper was to "...make a sheet of strong cap-paper up at the four corners in the form of a dripping-pan; pin up the corners, butter the paper and also the gridiron, and set it over a fire of charcoal; put in your meat, let it do leisurely, keep it basting and turning to keep in the gravy..." [Hannah Glasse, Art of Cookery. London 1774 - from The Cooks and Confectioners Dictionary by John Nott, London 1723] "Another way is to take pieces of white paper and butter them well. Wrap in each a piece of salmon, securing the paper around them with a string or pins. Lay them on a gridiron, and broil them over a clear but moderate fire till thoroughly done. Take off the paper..." [The Southern Gardener and Receipt-Book. Mary L. Edgeworth. Phila: 1860] 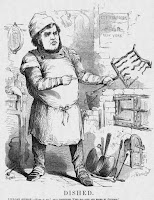 Excerpts from books:
General Instructions from Lee [1832]:
Keep your gridiron quite clean between the bars, and bright on the top: when it is hot, wipe it well with a linen cloth: just before you use it, rub the bars with clean mutton-suet, to prevent the meat from being marked by the gridiron.

Let the bars of the gridiron be all hot through, but yet not burning hot upon the surface: this is the perfect and fine condition of the gridiron. As the bars keep away as much heat as their breadth covers, it is absolutely necessary they should be thoroughly hot before the thing to be cooked be laid on them.

The bars of gridirons should be made concave, and terminate in a trough to catch the gravy and keep the fat, from dropping into the fire and making a smoke, which will spoil the broil. Upright gridirons are the best, as they can be used at any fire without fear of smoke; and the gravy is preserved in the trough under them.

Take care to have a very clear, brisk fire; throw a little salt on it; make the gridiron hot, and set it slanting, to prevent the fat from dropping into the fire, and making a smoke. It requires more practice and care than is generally supposed to do steaks to a nicety; and for want of these little attentions, this very common dish, which every body is supposed capable of dressing, seldom comes to table in perfection.
The Cook's Own Book. Mrs. N.K.M. Lee. Boston: 1832

If a gridiron is well polished at first, there can be no good cause for the bars ever becoming black. Let it be always rubbed bright when put aside. The gridiron should be hot through (which will take five minutes) before any thing is put on it. It must then be rubbed with a piece of fresh suet, to prevent the meat from being marked, or sticking to the hot bars; if for fish, chalk the bars.
The Servant's Guide and Family Manual. 2d ed. London: 1831