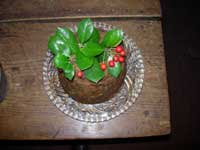 The 'Christmas' Plum Pudding during the Victorian Era became distinguished from the centuries old plum puddings. It contained rich ingredients, and many were served flaming. A few cookbook authors, such as the British chef Soyer, had a seperate Christmas section.


Most cookbooks gave several plum pudding recipes, Beeton [Beeton. Book of Household Management . 1861] detailed seven. Some American authors named one of the regular plum puddings "English". The White House Cook Book of 1887 [Gillette, F. L. White House Cook Book. 1887] listed English Plum Pudding (The Genuine), Christmas Plum-Pudding (By Measure), Baked Plum-Pudding, and Plum-Pudding, without eggs; and the Buckeye Cookbook [Wilcox, Estele Woods. Buckeye Cookery. 1877] contained: Christmas Plum Pudding, Eggless, Half Batch, Iced, Plum Pudding, and English Plum Pudding. They were either boiled in cloth or steamed in a tin or other mold and not to be confused with the baked fruit cakes which were also included in various cookbooks. 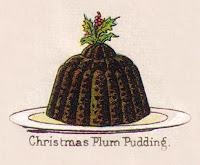 Many Christmas Plum Puddings were differentiated from the other plum puddings in that they were decorated with holly sprigs, covered with brandy, and set on fire. According to the venerable Victorian cookbook author Isabella Beeton: ... "The day it is to be eaten, plunge it into boiling water, and keep it boiling for at least 2 hours; then turn it out of the mould, and serve with brandy-sauce. On Christmas-day a sprig of holly is usually placed in the middle of the pudding, and about a wineglassful of brandy poured round it, which, at the moment of serving, is lighted, and the pudding thus brought to table encircled in flame."


In Dickens' A Christmas Carol 1843, "In half a minute Mrs. Cratchit entered -- flushed, but smiling proudly - with the pudding, like a speckled cannon-ball, so hard and firm, blazing in half or half-a-quartern of ignited brandy, and bedight with Christmas holly stuck into the top."

"With the Pudding," drawn by Arthur Rackham in the 1915 edition of A Christmas Carol, by Charles Dickens.

For an image from an 1844 book showing the "cannon-ball" shape and two ways it was sliced  - HERE
©2009 Patricia Bixler Reber
hearthcook.com
Posted by PBReber at 7:39 PM