"But the grand sport with apples on Halloween, is to set them afloat in a tub of water, into which the juveniles, by turns, duck their heads with the view of catching an apple. Great fun goes on in watching the attempts of the youngster in the pursuit of the swimming fruit, which wriggles from side to side of the tub, and evades all attempts to capture it; whilst the disappointed aspirant is obliged to abandon the chase in favour of another whose turn has now arrived.


The apples provided with stalks are generally caught first, and then comes the tug of war to win those which possess no such append-ages. Some competitors will deftly suck up the apple, if a small one, into their mouths. Others plunge manfully overhead in pursuit of a particular apple, and having forced it to the bottom of the tub, seize it firmly with their teeth, and emerge, dripping and triumphant, with their prize. This venturous procedure is generally rewarded with a hurrah! by the lookers on, and is recommended, by those versed in Halloween aquatics, as the only sure method of attaining success.


In recent years, a practice has been introduced, probably by some tender mammas, timorous on the subject of their offspring catching cold, of dropping a fork from a height into the tub among the apples, and thus turning the sport into a display of marksmanship. It forms, however, but a very indifferent substitute for the joyous merriment of ducking and diving."
The Book of Days edited by Robert Chambers.   London & Edinburgh: 1869 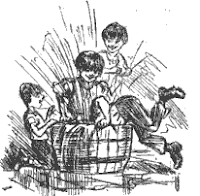 This [snap apple] was better fun than diving for apples in a tubful of water. So adept were some of the boys, that they could secure the apple at the first attempt. The old cook kept the tub supplied with apples; and the splashing, screaming, and laughter, showed how much the old-fashioned sport was enjoyed, notwithstanding the cold water and drenched hair. The boys then dived to the bottom of the tub for sixpences, which Mr. Balderson threw in. This was a more difficult feat than bobbing for apples, as you could not see the sixpence, even though it was thrown as near the middle of the tub as possible.
Routledge’s Every Boy’s Annual.  London: 1871


For more Apple Ducking or bobbing for apples and the strange game of Snap-apple, which involved a couple apples on a string... with a couple candles... click HERE. For other posts on Halloween: Handing out Soul and Seed Cakes HERE and Colcannon with a hidden gold ring in Ireland HERE