During the 1920s, dough was chilled in rolls or logs in the ice boxes, then sliced and baked. With more electric refrigerators, the variety increased. Links to other historic cookies are below.

New talks are up... including 20 talks in just two days - this Wed. and Thurs.

Stir butterine and sugar well, add eggs well beaten and then flour sifted with soda. Roll into several rolls, 2 inches thick, let remain on board over night or place in ice box until firm. Cut in thin slices, crosswise, place cookies in pans in moderately hot oven until crisp. Use 1/4 lb. almonds, blanched and cut in small pieces, in place of the peanuts, if desired.
The Settlement Cook Book. Milwaukee: 1921

Logs were formed by dividing the dough (into two or three) and rolling each out to the desired size roll. The magazine Popular Mechanics, Aug 1942 had a small article on molds in a variety of shapes.

"Molds in which dough for ice box cookies may be formed and then removed for slicing into a pan will speed up cookie making by eliminating the use of rolling pin and cutter. The forms, about 9 inches long, are easily opened and closed with attached clips. They are available in several shapes, including playing card symbols."
Popular Mechanics Aug 1942


By the 1950s, many types of refrigerator cookie recipes were published, such as in McBride’s Encyclopedia of Cooking of 1959.

Many recipes, first page of several (click to enlarge) - 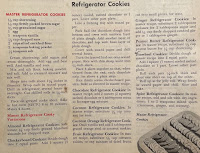 
Research study using ice box cookies - 1928
"Ice box cookies were the type studied, largely because of their popularity with children, and because the large surface area and high cooking temperature offered a severe test of the degree of loss in vitamin potency due to oxidation. The feeding experiments, (using rats as the experimental animal), while still in progress already show that butter cookies represent a most valuable source of vitamin A. Some destruction of the vitamin takes place during the cooking process, but the finished cookies have demonstrated their effectiveness as a vitamin carrier, and thus deserve recognition as a source of vitamin A to fortify the diet of children."
Annual Report of the Director 1928-1929 Ag Experiment Station, U of Wisconsin, Madison

Peanut-Butter Pinwheel.1920
"Work two tablespoonfuls of fat into two cupfuls of flour which has been sifted with four teaspoonfuls of baking powder and one-half teaspoonful of salt. Mix to a dough with about three-fourths of a cupful of milk. Roll out lightly to about one-half inch in thickness. Spread with a very thin layer of peanut butter and small pieces of Canton ginger. Roll up like a jelly roll and cut in one-half inch slices. Put them in a buttered cookie pan so that they will not touch. Bake in a hot oven twenty minutes."
The Peanut Promoter. Suffolk, VA: Nov 1920

My Mom always made a chocolate refrigerator cookie with green mint filling (butter, powdered sugar, milk) as one of many cookies for her yearly Christmas open house. The huge amount of cookies would be stored in the large deep freeze, and we kids would sneak 'a few'. I still prefer them frozen.