Jean-Etienne Liotard (1702-1789) did the famous watercolor "The Chocolate Girl" (La Belle Chocolatiere) c1744 which has been copied many times over the years. He also did some other interesting chocolate paintings with closeups of the details...


Her tray has a cup with cocoa in a silver mancerina holder, and a glass of water. 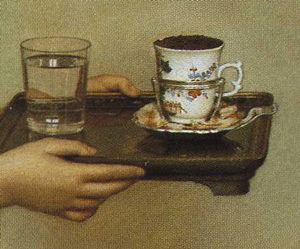 The most famous was Baker's Chocolate.  The Massachusetts company was founded in 1780, and they paid to use the image, trademarking the design in 1883.

Inside their 1913 booklet is this drawing of a tin of cocoa.

Liotard included a similar tray in "Le Petit Déjeuner" but this cup is in a saucer.  Oh, and also check out her hair style with the little blue flowers.

"A Lady Pouring Chocolate" (La Chocolatiere) by Liotard in 1744. 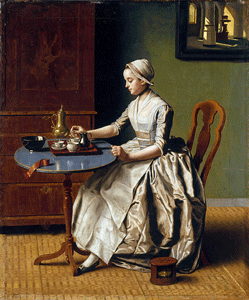 The lady is turning the spout. 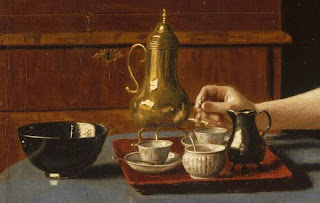 Generally cocoa was served in a pot with a spout near the top for the foam and a hole in the top for a molinillo to froth the liquid. 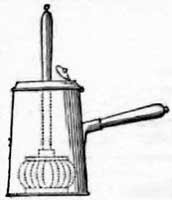 Note the adorable hair style of the little girl in the painting.  The title is unclear, one site called it "Madame Liotard and her Daughter." 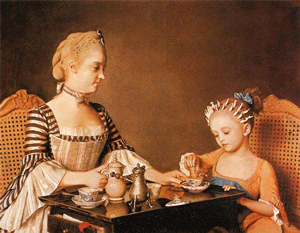 Now back to the equipment...

For more information about chocolate making equipment, how the originals worked and where to get reproductions, check out a previous posting HERE
Additional pictures by Liotard, including a fabulous one of his young son slicing a piece of butter, in the shape of a cone, for his bread. HERE
©2013 Patricia Bixler Reber
hearthcook.com
Posted by PBReber at 10:33 AM