Nutting??  Two social events were called Nutting Parties - an indoor party with a nut theme (see below for a 1907 description) and an outing to pick various types of nuts (1832 and 1902, below).


Candy Pulls were another type of social party, which I described in two previous postings HERE .

"Many a reader will stop as he sees the fine engraving of a nutting party... and recall the time in which he participated in such a scene. How vividly all presents itself in memory; the fine air of the clear autumn morning; the golden burs of the chestnuts shining against the dark green leaves; the pleasant “woodsy” smell;

the climbing and beating the trees; 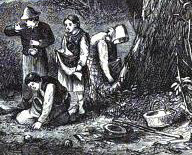 the gathering the nuts;


the pricking with the burs; the young companions– and all that go to make up a happy day at chestnuting."  [American Agriculturist for the Farm, Garden, and Household. October 1870 New York]

Chestnutting by Winslow Homer from Every Saturday, An Illustrated  Journal of Choice Reading, October 29, 1870 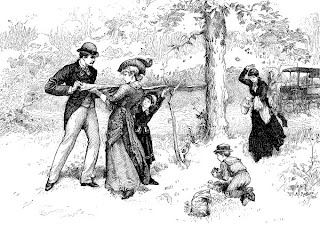 
"Nutting Day is still kept up as a rural holiday in September in many parts of England…old and young, maidens and their sweethearts, generally accompanied by a troop of happy boys and girls, sally out with bags and crooks, bottles and baskets, containing drink and food, pipes and tobacco for the old people…
One great feature of this old rural merrymaking, is their going out in their very homeliest attire, and many there were who had worn the same nutting-dress for years. Old Royster’s leathershorts had been the heirloom of two generations, and when last we heard of them, were still able to bid defiance to brake or brier.
What merry laughter have we heard ringing through those old woods, as some pretty maiden was uplifted by her sweetheart to reach the ripe cluster of nuts which hung on the topmost bough, where they had been browned by the sun, when, overbalancing himself, they came down among the soft wood-grass, to the great merriment of every beholder!


Hazelnuts.  When this clear yellow tint of the leaves is seen, the nuts are ripe, and never before—one shake at a branch, and down they come rattling out of their cups by scores— real 'brown sheelers' as they are called by country-people. Wood-nuts gathered at the end of September or the beginning of October, have the true 'nutty'  flavour, which is never tasted if they are gathered before.
There were no such nuts to be found anywhere as on these aged hazels, which, when ripe, we could shake out of their husks, or cups—nothing to be found in our planted Nutteries so firm and sweet as those grown in this wildwood…"
The Book of Days by Robert Chambers. London: 1832


"Imagine a hundred children grouped in the dinginess of one of the city depots awaiting the train which is to take them to the nutting grounds. It is only a ten-mile ride, but the youngsters are as eager about it as though they were going a thousand.   Some of them have never been nutting, and never have set eyes on a hickory nut tree, a hazel-nut bush or a walnut tree. They have seen the nuts themselves, for every town merchant has them for sale during the winter, but knowledge of the trees has never come to them.


… the nutting party were told to arm themselves for the attack. Bags and baskets were supposed to be enough in the way of weapons, but some of the youngsters grabbed hoes, others had spades and others rakes. They were told that hazelnuts were to be found, and maybe butternuts, and perhaps hickory nuts, and that there were at least two walnut trees to be despoiled if anyone discovered them in the forest depths.  Many a little tooth was injured that day by attempting to crack the nuts in the mouth before they were dry.  The nuts came into the city that evening to be dried on a tin-roofed building where despoilers could not get at them."
Heath, Lillian.  Eighty Good Times out of Doors.  Chicago: 1902


“The invitation may be written on paper, folded neatly and slipped inside an English walnut shell—which is then glued together and sent in a small box, labeled "A Nut to Crack."  Decorations should carry out, as far as possible, the effect of a woodland scene. “


Games included picking up nuts with a “pair of bonbon tongs—the kind that come in candy boxes are best”  with prize options of “a silver English walnut thimble case; a silver English walnut, exact size, which opens, containing powder puff, mirror, place for miniature, small scent bottle and pincushion, "All in a Nut Shell"; a real English walnut shell containing a fine lace-betrimmed handkerchief, enclosed in a series of boxes, one fitting within the other; a sterling silver almond set or almond scoop;…” and for “the gentlemen, a burnt wood nut bowl, with nut cracker and set of nut picks; a handsome edition of E. P. Roe's "Opening of a Chestnut Burr;" a silver peanut magic pencil, etc.”


"The refreshments may perfectly carry out the nutting idea:"


Recipes: “For the peanut sandwiches, use the ready-made peanut butter. For walnut sandwiches, chop meats very fine, mix with mayonnaise and spread on buttered bread. Serve salad on lettuce leaf, garnished with a few whole nut meats. In salting mixed nuts, it is not considered necessary to blanch any except almonds and peanuts. The bisque of almonds requires one pound blanched almonds, one heaping cup of sugar and two pints of cream. Pound almonds a few at a time, together with a little sugar and rosewater, mix with cream and freeze. For burnt almond ice cream use one quart of cream, one-half pound of sugar, four ounces of shelled almonds, one teaspoon of caramel, one tablespoon of vanilla, 4 tablespoons of sherry. Blanch and roast almonds, then pound in a mortar to a smooth paste. Put one-half the cream and the sugar on to boil, stir until the sugar is dissolved, then add the remaining pint of cream and the almonds; stand away to cool; when cold, add the carmel, vanilla and sherry. Freeze and pack. For the nut cake, use two pounds nuts cut fine, eight eggs, one pound sugar, one pound flour, one teacup butter, two heaping teaspoons baking powder, one cup milk, and juice of one lemon. Mould the cheese balls round with the hands, and stick an English walnut meat on either side.”