Peach picking in Delaware, 1878 and Georgia, 1887 with details of baskets, staff, ladders, wagons and a sorting table; pictures of Peach Houses, how to dry the peaches in Peach Kilns and ovens, and a recipe for Peach Pickles, 1774. 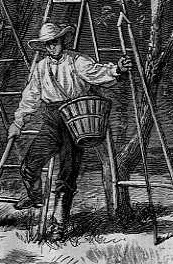 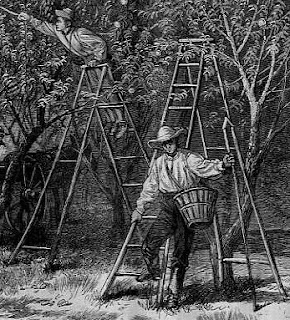 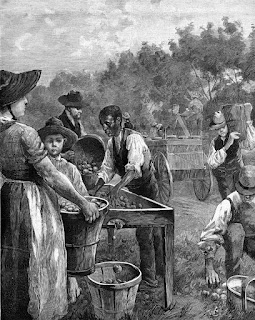 Note the hole in the sorting table and the harvesting of peaches from the trees in the background.  Click on the Harper's Weekly picture for a larger view.

The peach orchards of the 1800s could be very large.  The extremely wealthy Joseph Vann (1798-1844), a Cherokee living in Georgia, was evicted from his estate "Diamond Hill" (built 1804/1819, now a museum) in 1834, just before the Cherokee Removal/Trail of Tears.  He owned many slaves, a large brick house (HABS photo/LC) outbuildings, trading post, a peach kiln, and over a thousand peach trees. 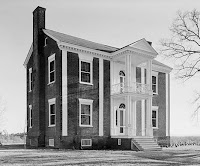 Peach trees could also be grown indoors in Peach-Houses.  The following quote and illustrations are from John Loudon's An Encyclopaedia of Gardening, London: 1822.

The trees were in pots or planted directly in the ground.  The glass side (seen in first image on right, the second image is "for a main crop") had windows to be opened upwards.  Flues running round the length of the house transported the heat from the furnace.  For more protection in the winter it “… may be covered by mats in front during the most severe nights of winter…. It is a common practice to combine the vinery and peach-house, and to train the vines close under the glass, and the peach-trees against the back wall; or to train...on a flat or table trellis, in the middle of the house…Knight, and many practical gardeners, are of opinion, that the roofs of all peach-houses should be made to take off, in order to color the fruit, and afterwards expose the trees to the rains, &c. for the sake of destroying insects.”

One manner of preserving peaches was to dry them on trays of slats in a low heat bake oven, in a peach kiln (small building with slotted shelves and stove), or even on roofs - "Apples are very abundant in this neighbourhood [Saratoga Springs, NY], sold at 3d. sterling per bushel. We see large quantities of them dried by exposure to the sun, first pared and cut in quarters, and then laid in any convenient situation, frequently on the house tops. Peaches are dried in the same way.   [Stuart, James.  Three years in North America,  NY: 1833]
﻿

A recipe using sugar syrup and oven, 1803:  To dry Peaches. "Take the fairest and ripest peaches, pare them into fair water: take their weight in double refined sugar: of one half make a very thin syrup; put in your peaches, boiling them till they look clear, then split and stone them. After this boil them till they are very tender, lay them a draining, take the other half of the sugar, and boil it almost to a candy; put in your peaches, and let them lie all night, then lay them on a glass, and set them in a stove till they are dry. If they are sugared too much, wipe them with a wet cloth a little; let the first syrup be very thin; a quart of water to a pound of sugar."  [Carter, Susannah.  The Frugal Housewife.  NY: 1803]


Peach Water for flavoring, like rose water, or Peach Brandy could be made.  “The greater part of the farmers [Pennsylvania] are not only cultivators, but also traders and manufacturers; they make… and sell a great deal of liquor distilled from peaches, corn, rye, maple sugar...”  [Levasseur, Auguste.  Lafayette in America in 1824 and 1825…  Phila: 1829]

To pickle peaches,  1774
"TAKE your peaches when they are at their full growth, just before they turn to be ripe; be sure they are not bruised; then take spring-water, as much as you think will cover them, make it salt enough to bear an egg, with bay and common salt, an equal quantity each; then put in your peaches and lay a thin board over them to keep them under the water. Let them stand three days, and then take them out and wipe them very carefully with a fine soft cloth, and lay them in your glass or jar, then take as much white wine vinegar as will fill your glass or jar: to every gallon put one pint of the best well-made mustard, two or three heads of garlick,a good deal of ginger sliced, half an ounce of cloves, mace, and nutmeg; mix your pickle well together, and pour over your peaches, tie them close with a bladder and leather, they will be fit to eat in two months. You may with a fine penknife cut them across, take out the stone, fill them with made mustard and garlick, and horse-raddish and ginger; tie them together."  [Glasse, Hannah.  The Art of Cookery.  London:  1774]

Past posts on peaches -- Peach Pickles (1774), Peach Houses and images of picking peaches HERE, a Peach Cobbler baked over the fire in a stewpan with a flaky crust HERE, and other peach recipes (including 1824 peach ice cream, peaches in brandy, spiced peaches HERE
The peach basket photograph is from the  Doug Towle Calalog.