For Washington’s Birthday the other year I posted information on Washington Cakes, HERE and this year the topic is Washington Pie.  During the 19th century, there were two types of cakes called Washington Pie.  The first was a round layer cake of sponge or pound cake with jelly or cream between the layers like Jelly Cakes or Boston Cream Pies.  The second Washington Pie was composed of pieces of leftover cake moistened and encased in pie crust, baked in  2 1/2 foot square pans and initially sold at Washington, D.C. bakeries. ...


TINS, PANS
The batter was baked in “deep Washington pie-tins”, “shallow and circular tins half an inch deep” [Bliss, 1850, below] or  “… a wooden box-cover…”

“…when cold, lay one on a plate, and spread over it marmalade, or any other jelly, as thick as the cake; then cover it with another cake.” [Mrs. Putnam’s Receipt Book.  Boston: 1850]  In a story in Student and Schoolmate magazine, Boston, 1869, one of the characters said he “had a piece of Washington pie, and that would have been well enough, only I like the jelly thick, and that jelly was thin.”


Jelly Cakes and Robert E Lee Cake [married Washington’s great granddaughter who inherited Arlington House], also had jelly between the cake layers.  A few recipes  such as Godey’s Lady’s Book, 1870 or Housekeeping in Old Virginia, 1879 had applesauce between the layers of the Washington Pie.
CREAM FILLING


Starting in the 1870s, a cream or custard filling, white or chocolate, was being used between the layers, and in the early 1900s that was the most popular.  The White House Cookbook, 1889 said it was similar to Boston Cream Pie,  the difference was adding half an ounce of butter.  The magazine for the Boston Cooking School:   “Query No. 2666. — "Recipes for 'Boston Pies,' the ones made under the names of 'Washington Pie,' 'Washington Cream Pie,' and 'Chocolate Washington Pie?'"
‘Boston Pies’  As we understand the matter, these "pies" are a plain, cheap cake-mixture baked in round, layer-cake pans; the filling for Washington Pie being jam or jelly, for Cream Pie a mixture known as "English Cream," while the filling for a Chocolate Washington Pie is an English Cream in which chocolate is melted. The cake-mixture... is suitable for any of these pies.” [American Cookery, 1921 ] 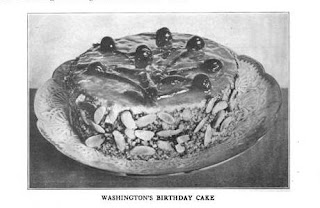 The finished cake would be topped with powdered sugar, iced, "...frosting, made of sifted confectioners' sugar and hot milk or water with a little flavoring, makes a good finish for the top of these cakes, though quite as often they are finished by simply sifting a little confectioners' sugar over the top.” [American Cookery, 1921 ] or “…decorate the top with angelica and cherries, maraschino style. Cover the decoration with a glaze made of apricot jam, strained fine.”  [American Cookery.  Boston: 1921 (Boston Cooking School)]   photo above.


NAME
George Washington was the inspiration for the name of this cake.  In several early cookbooks the recipe preceeded recipes for LaFayette Cake, and Bliss, 1850 said “This cake is sometimes called Washington Pie, Lafayette Pie, Jelly Cake, &c.”   Washington’s Birthday Cake was the title of the recipe in the 1921 Boston Cooking School magazine.


“It has been commonly believed of the people born and bred in America that most of them attained a premature old age without having ever, in the whole of their brief span, seen a home made loaf of bread … that the Washington pie was so called by way of paying the highest possible honor to the Father of his Country… [The Nation: a weekly journal.  NY: 1866]
“The birthday of the immortal Washington was celebrated with appropriate ceremonies  … and at one boarding-house, at least, Washington pie appeared on the dinner-table.”  [The Harvard Advocate.  1870] In 1853, Washington Pie was listed in the Bill of fare for the “Second festival of the Sons of New Hampshire: celebrated in Boston, November 2, 1853”


RECIPES
WASHINGTON PIE c1849 probably the earliest recipe
Three quarters of a pound of sugar; half a pound of butter beat to a cream; add a cup of cream, half a teaspoonful of saleratus, six eggs beat up well; flavor it with lemon; add a pound of flour; bake it in round tin pans or a wooden box cover, about fifteen or twenty minutes; when cold, lay one on a plate, and spread over it marmalade, or any other jelly, as thick as the cake; then cover it with another cake. Frost it, or not as you please.
Putnam, Elizabeth H. Mrs. Putnam's receipt book: and young housekeeper's assistant. Boston: 1850, c1849.

WASHINGTON CAKE.  1850
Beat to a cream half a pound of butter and half a pound of white sugar; then stir in eight eggs well beaten, one glass of rose-water, and one pound of sifted flour; bake in shallow and circular tins half an inch deep; when done, spread a thick layer of raspberry jam, or any marmalade or jelly, upon one cake and lay another cake upon the top of the jam, and sift white sugar over the whole.
This cake is sometimes called Washington Pie, Lafayette Pie, Jelly Cake.
Practical Cook Book. Mrs. Bliss of Boston. Phila: 1850

And not to forget Martha....