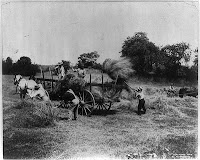 When boiling ham, hay would be placed in the bottom of a ham boiler. Ham cooked with hay would “…greatly improve the flavor” [Leslie, Eliza.  New Cookery Book.  Phila: 1857], and according to the Detroit Free Press cookbook in 1881, it “…mellows the taste, and keeps it from being burned.”   A third reason given was to absorb impurities ...


“…they should be boiled until done, in good, soft water; and, when nearly done, throw in a handful of clean Timothy hay; it absorbs all impurities which may be around the outside of the ham. As soon as done, take out the hay, but leave the ham in the water until nearly cold, when you may take it out.”  [Annual Report of the Commissioner of Patents. 1852]


Hay could also be part of the storing process:  “Make sacks of coarse cotton cloth, large enough to hold one ham, and fill in with chopped hay all around about two inches thick. The hay prevents the grease from coming in contact with the cloth and keeps all insects from the meat. Hang in the smokehouse, or other dry, cool place, and they will keep a long time.”  [Youman, A.E. A Dictionary of Every-day Wants. NY: 1872]
A further use of hay in the late 19th/early 20th centuries was for hay boxes, which were early forms of fireless cookers.  In the future, I will post an article on this unusual cooking apparatus.

Image from Library of Congress.

UPDATE - Fall 2012  - A marvelous collection of Hay depictions in art and photograghs can be viewed (and searched) at http://www.hayinart.com

To boil a Ham. Lay your ham in cold water for two hours, wash it clean, and tie it up in clean hay; put it into fresh water, boil it very slow for one hour, and then very briskly for an hour and a half more. Take it up in the hay and let it lie in til cold, then rub the rind with a clean piece of flannel.  [E. Smith. The Compleat Housewife, 1727]


To Boil a Ham. —There are so many "best modes" of cooking ham, that it is difficult to decide among them. This much, however, is certain, that unless you have a very good cook, it will be well to envelop the ham in a flour-and-water crust, and bake it. Hams are sometimes boiled in lard, and the reason for this is, that it takes a very high temperature to make fat boil, and consequently the ham is cooked very gently. Some persons boil it in champagne, and others in white wine.
The old-fashioned way was to boil a ham, of about 20 lb. weight, in the boiler from three and a-half to about five hours, according to its size, simmering it all the time. The more modern method appears to be to put it in cold water, and bring it to boil; then simmer till done. A very old-fashioned way in England to boil hams, and which has a great many admirers to this day, is wrapping up the ham in hay, and simmering it very gently; while others are contented to place hay under the ham in the pot. No harm is done by either mode; but the cook must remember, that the ham is to be put into hot water and never allowed to boil. But to cook a ham to perfection, make a large pot-au-feu, and cook your ham in it. Let it simmer until an iron skewer will enter easily to the bone; then lift it out of the pot; take the skin off; either glaze it, or sift fine raspings over it. Send it hot or cold to table, and we will promise that neither white wine nor champagne is required to make it excellent. The hay had better be given to your horse, and the white wine and champagne drunk at table.  [Table Observances. London: 1854]


TO BOIL A HAM.   Wash and scrape the ham clean ; put it on in cold water enough to cover it; put into the water two onions, two carrots, a head of celery, a dozen cloves and a handful of timothy hay; boil without stopping until the skin will readily peel from the ham; cover the ham with rolled crackers, or bread crumbs that have been browned and rolled, and bake in a slow oven for two hours.  [The Home Cook Book. Chicago]
Nice sweet timothy hay, cut fine, is the best thing extant for packing bacon, as it imparts a pleasant aromatic taste ...   [Thomas, John.  The Illustrated Annual Register of Rural Affairs and Cultivator. 1870]