John Murrell, 1621 in his receipt for White Gingerbread said to "...roule it in round cakes and print it with your moulds..."  The gingerbread seller from the Cries of Paris, left, has some moulded cakes. In 1749, Charles Carter [below] suggested to shape the gingerbread dough "...into long rolls or cakes, as you please..."


Gingerbread Rule, a recipe from a written manuscript in Ct., mid to late 1700s, was posted on 18thcenturywomen Yahoo group, with the query: what did the word Rule mean?  I think RULE was ROLL.  The words roule [rule with an o] and rowle appear in some 17th century cookbooks to mean roll it out, or make in a shape of a roll, and then bake it.


Rolls of gingerbread prices in early 18th cen. America were "...a penny a roll of gingerbread... a card of ten rolls for fourpence-halfpenny..." at pedlers' cards on the Green recalled Alcott. [New Connecticut. Amos Bronson Alcott. Boston: 1887]


Roll Gingerbread literally called for rolling the baked thin wafer around a stick. The1854 receipt of flour, sugar, butter, ginger and lemons combined into a soft paste dropped on tins to bake, then "...either be made small for nuts, or into large cakes, when they are rolled round a small stick whilst warm." [The Complete Biscuit and Gingerbread Baker's Assistant. George Read London: 1854] His next recipe, Italian Jumbles, with 6 lbs. of raw treacle, rolled out dough 1/8 in., cut in 3" rounds, bake, then "...turn them, whilst warm, in the form of a cone, the same as the grocers make up their sugar papers, or turn them round a stick as the last."


Gingerbread Nuts were balls or small round cutouts. Frederick Nutt, The Complete Confectioner, 1790 simply said "...make them the size you choose..." Eliza Leslie [Seventy-five receipts for pastry, cakes, and sweetmeats ] described two versions: "...roll it out in two even sheets, about half an inch thick, and cut it out in little cakes, with a very small tin, about the size of a cent. [or] You may, if you choose, shape the gingerbread nuts, by putting flour in your hand, taking a very small piece of the dough, and rolling it into a little round ball."


In The Cook's Own Book by Mrs. N.K.M. Lee in Boston: 1832, there are four recipes for Gingerbread Nuts, to be made: 1- "roll it out, make it into nuts; 2- with a spoon drop the nuts upon buttered tins; 3- make it into nuts, by pinching it into pieces with the finger and thumb; [or] 4- form it into nuts, or roll it out, and cut it into round cakes." 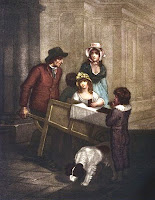 To make gingerbread.
Take three pounds of fine flower, and the rind of a lemon dry'd and beaten to powder, half a pound of sugar, or more, as you like it, and an ounce and half of beaten ginger; mix all these well together, and wet it pretty stiff with nothing but treacle ; make it into long rolls or cakes, as you please ; you may put cadied orange-peel and citron in it: butter your paper you bake it on, and let it be bak'd hard.
The London and Country Cook: or, Accomplished Housewife. Charles Carter 1749 and in Elizabeth Moxon 1764

Honeycomb, or Roll Gingerbread.—1 lb. of flour, 1 lb. of good moist sugar, 1/2 lb. of butter, 1 oz. of ground ginger, the yellow rind of 2 lemons grated off, some also add the juice.

Rub the butter in with the flour, add the sugar, and mix the whole into a soft paste with raw treacle thin enough to be dropped on tins, which should be well buttered; let each cake be four or five inches asunder, as they spread very much; bake them in rather a cool oven. These may either be made small for nuts, or into large cakes, when they are rolled round a small stick whilst warm. These should be kept quite close in a tin canister, in a dry warm place.
The Complete Biscuit and Gingerbread Baker's Assistant. George Read. London: 1854

Rub the butter in with the flour, mix in the sugar and spice; make a bay, pour in the treacle, and make the whole into a moderately stiff paste; this improves by keeping. Roll it out into sheets rather more than the eighth of an inch in thickness; cut them out with a spice cake cutter (a plain round cutter three inches and an eighth in diameter) ; put them on tins well buttered, about three inches asunder; wash the tops with water, and bake them in a cool oven. They will be found to be baked enough, if, on pressing the cake in the centre with the top of your finger, it will rise up again. 'When they are baked and a little cool, cut them from the tins, by passing a thin knife under them; turn them, whilst warm, in the form of a cone, the same as the grocers make up their sugar papers, or turn them round a stick as the last. If they should get too cold to turn, put them again into the oven to warm.

Brandy Snaps are the same as these, without being turned. The dough is best made up a week or fortnight before it is required to be used.
The Complete Biscuit and Gingerbread Baker's Assistant. George Read London: 1854

GINGERBREAD, ROLL. Take 3 lbs. of flour, 2 lbs. of sugar, 1 lb. of butter, seven eggs, a tea-spoonful of saleratus dissolved in a cup of milk, and a cup of ginger. Roll it out very thin on tin sheets. It will bake in ten or fifteen minutes.
[among many other recipes such as G, Lafayette, G, Spiced; Oatmeal; Indian; Nuts...]
The Household Encyclopædia. London: 1858

Two pounds of flour, sifted.
One pound of fresh butter.
Half a pound of brown sugar.
One quart of sugar house molasses.
Two ounces of ginger, or more, if it is not very strong.
Twelve dozen grains of allspice, /
Six dozen cloves,                   / - powdered and sifted.
Half an ounce of cinnamon, /

Cut up the butter in the flour. Spread the sugar on your paste-board, and crush it very fine with the rolling-pin. Put to it the flour and butter, and then add the ginger and other spice. Wet the whole with the molasses, and stir all well together with a knife.

Throw some flour on your paste-board, take the dough (a large handful at a time) and knead it in separate cakes. Then put all together, and knead it.very hard for a long time, in one large lump. Cut the lump in half, roll it out in two even sheets, about half an inch thick, and cut it out in little cakes, with a very small tin, about the size of a cent. Lay them in buttered pans, and bake them in a moderate oven, taking care they do not scorch, as gingerbread is more liable to burn than any other cake.

You may, if you choose, shape the gingerbread nuts, by putting flour in your hand, taking a very small piece of the dough, and rolling it into a little round ball.*


* Gingerbread nuts are much improved by mixing with the dough half a tea-spoonful of pearl-ash, dissolved in a little vinegar.
Seventy-five receipts for pastry, cakes, and sweetmeats. Eliza Leslie. Phila: 1828