There were several methods, in addition to roasting on a plank or encasing in clay, to prepare fish by a fire. The Lewis and Clarke expedition of 1804-6 found that the Clatsops of the Pacific Northwest used a spike. ...


"Meat is roasted on one end of a sharp skewer, placed erect before the fire, with the other fixed in the ground. The spit for fish is split at the top into two parts, between which the fish is placed, cut open, and its sides extended by means of small splinters." [History]

"Roasting and Barbacueing" in Robert Beverly's History and Present State of Virginia... 1705

The image "Plantation Cooks, Surinam, 1839" shows fish being suspended above the cooking pot and fire.

In the 1769 book "The Lady's, Housewife's, and Cookmaid's Assistant by E. Taylor, a Fish Spit was used for Haddocks, a lark spit for Carp, and "To roast a Pike. Scale and gut it through the gills... When you have put this force-meat into the belly, spit it, tie it on with two splinters, and a piece of tape, dredge and baste it."

Laths of Willow were used to roast Jack or Pike by Richard Bradley in 1732. Clean and stuff the fish, "...cut two small Laths of Willow, or any other Wood, except Deal, or such as has a Turpentine Juice in it, of the length of the Fish, and lay the Fish upon the Spit, with the two Laths upon the Fish, and bind them together with a Fillet of Linnen, about an Inch wide, which must be wrapp'd round them in a Screw-like manner, and then laid down to the Fire..."

Wood to be used as a plank included "a suitable board, (not Pine;)" [Webster], "clean oak board about three inches thick" [Peterson]. "oaken board or barrel top" [Mason]. 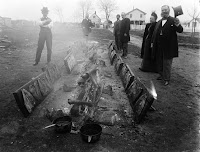 To Roast A Shad  1824
"Fill the cavity with good forcemeat, sew it up and tie it on a board of proper size, cover it with bread crumbs, with some salt and pepper, set it before the fire to roast it; when done on one side, turn it, tie it again, and when sufficiently done, pull out the thread and serve it up with butter and parsley poured over it." [Randolph]

Complete recipes at: Planked fish
Plantation cooks image from The Atlantic Slave Trade and Slave Life in the Americas: A Visual Record


Planking shad at Marshall Hall, Maryland, on the Potomac,1893 photo from Library of Congress.