When was the term "summer kitchen" first used? The separated kitchen building we refer to as the summer kitchen has been built for centuries and in many cases still remain. References can also be found in probate inventories, letters, diaries, etc. to a kitchen building separate from the house, but were simply called "kitchen." Other terms were "out kitchen" and "back kitchen." ...

In his 1846 book The Life of a Negro Slave, Charles Ball recalled his arrival at a southern plantation. "Thus we passed the first day; sleeping at night in a shed or summer kitchen near the house..." An earlier mention was in an English/Dutch dictionary of 1832 for both summer-kitchen and winter-kitchen.

By the second half of the 19th century, there were hundreds of references to a "summer kitchen." However, it was not always the image of a southern home with the kitchen completely separate from the house.  Below are some examples of northern home plans with the "summer kitchen" part of the house, or attached.

Some reasons given for the second kitchen were: "sufficiently removed from the main building to prevent heat or odor penetrating the interior, is conveniently near for use" [1855] or "intended to relieve the larger room of the heavier work" [1876]. 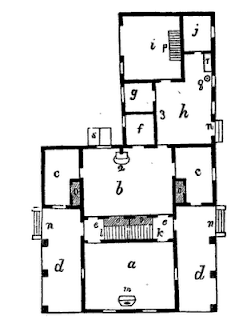 "The room b is intended for a dining-room in summer, and the room h for a summer kitchen; in winter, the room b to be used for both purposes." The Farmer's and Emigrant's Handbook. Josiah Marshall, NY: 1845


A second northern example is from Homes for the People... by Geevase Wheeler NY: 1855. The home was built on Long Island Sound. 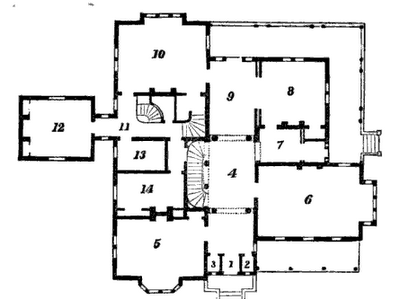 "In the rear of the dining-room [10] is a private hall, No. 11, in which are a flight of stairs to the floor below, a servants' stairway to the chambers, a large china-closet, and a dumb-waiter for transmission of dishes from below. The smallness of the scale renders these portions somewhat minute, but they are all of ample size and convenient arrangement.

From this hall an entry leads to a summer-kitchen, No. 12, which is fifteen by nineteen, and so placed as, though sufficiently removed from the main building to prevent heat or odor penetrating the interior, is conveniently near for use.

The space below is occupied by a large kitchen under the dining-room provided with a range and boiler, an old-fashioned brick oven, and a large open fire-place for roasting. There is also a laundry beneath the family parlor, and, in the rear of that, a bathingroom for the use of the servants. Spacious provision is made for the furnace, which is below the vestibule, No. 7, and the rest of the space is filled with store-rooms, cellars, milk-room, larder, &c.; all carefully arranged and of liberal size. Below the summer kitchen is the coal-cellar; and, under the entry that leads to it, space is left for a retired inclosure containing a water-closet for the servants."

Another northern example, from 1876: 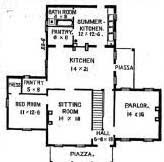 "The Summer-kitchen, intended to relieve the larger room of the heavier work, is furnished with a Range, Boiler, Sink, Pump, and Wash-tubs, and has an outside door. The Bath-room is situated at the side of the summerkitchen, and contains a Bathtub and a Seat-closet. A Tank, 3x3x6 feet, is placed between the ceiling and roof of this wing, and arranged to receive rain-water from the main roof. A Forcepump is set near the iron sink, and arranged to supply water from the cistern to the tank, when the rain-supply is exhausted. "
American Agriculturist. vol. 35 NY: 1876
©2010 Patricia Bixler Reber
hearthcook.com
Posted by PBReber at 2:01 PM