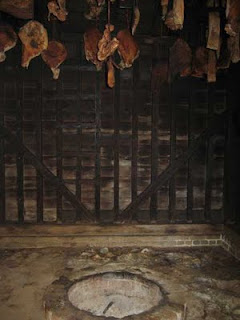 The James River and centuries old methods divide the Virginia hams prepared in Colonial Williamsburg from those by the Edwards’ Ham Company in Surry, Virginia. While the basic technique of salting and smoking to preserve meat is the same, Edwards is able to make use of modern technologies to replicate the seasonal process.

Dry curing has been done for centuries, and still is for other regional hams such as “Kentucky Hams” and the “Old Hams” of Maryland.

Receipts abound in old manuscripts, cookbooks, and farming manuals on curing. Andrew Henderson recalled his father’s salting process and smokehouse fifty years prior to his 1826 book, The Practical Grazier.

"… the sides and hams dressed the first day may be kept separate, and piled up across each other upon some flags or boards, giving each flitch and ham a powdering of saltpeter, and then covering them over with salt. The saltpeter ought not to be omitted, as it opens the pores of the flesh to receive the salt, and likewise gives the hams a pleasant flavour, and makes them more juicy. Let them lie in this state about a week, then turn those on the top undermost, giving them a fresh salting. After lying two or three weeks longer they may be hung up to dry in some chimney or smoke-house…the flitches were about two to three feet from the floor, which was covered about six inches thick with sawdust, kindled at two different sides; it burned without any flame injurious to the bacon. Bacon and hams so prepared are generally ready in about ten days to pack into a hogshead and send off to market. Bacon can only be cured from the middle of September until the middle of April."

The Colonial Williamsburg foodways staff start their demonstration on the second Saturday in December. Salt, salt petre and brown sugar are rubbed onto the hams which are put in salt in the salt house. The colder temperatures will increase the time, and if it freezes, the curing process ends. After weeks laying in the salt, the excess salt is washed off and the meat covered with ashes, which from their research, was used rather then pepper, that was used at a later time according to Frank Clark.

To obtain salt, Betty Randolph wrote to her uncle, Landon Carter, on Sept 16th 1776, that she had “… taken the liberty to send some boilers down to Rippon to make salt.” Rippon Hall, on the brackish York River, was one of Carter’s homes. A copy of her letter is tacked to the door of the Randolph smokehouse in CW.

The hams are hung in a smokehouse for one to three and a half weeks, depending on the size and weather, of constant smoking using green hickory wood. They remain hanging for a few years.Smoking the hams could be done in chimneys, ‘smoking-closets,’ attic smoke rooms, in wood, brick or stone smokehouses and even in a barrel. Wood types to be burned varied. In Richard Allen’s Domestic Animals, NY: 1848, “Green sugar-maple chips are best for smoke, next to them are hickory, sweet birch, corn cobs, white ash, or beech.”

The Edwards’ Ham Company of Smithfield County, Va. follows the age old process but uses modern apparatus. Where the salting process was done during the cooler months, now refrigerated rooms house the pallets of ham and salt. Halfway through the process they are rotated top to bottom with more flake salt added, just as Andrew Henderson noted two hundred years earlier.

As the months warmed, the ‘fermenting’ would naturally cure the meat, according to Edwards. Smoking helps to preserve the surface and repel insects. Hickory sawdust is burned five to eight days in an outside generator with the smoke flued into and out of the smoke rooms. Each room can hold up to twenty two racks of ninety six hams. The early smokehouses of his grandfather were shaped like wigwams, for market appeal, with fires inside at the base.

At fifty or sixty days into the aging process, the taste starts to change, and the color becomes a richer hue. The hams are aged a year, or longer.

While in the past, the process was limited to the fall and winter months, mechanization allows for a year round production schedule. The changing popular tastes are also affecting what is done by the various producers. The modern pigs do not possess the tremendous fat content of those two hundred years ago.

The heirloom pork used at Colonial Williamsburg is extremely fat, as seen in the white part of the ham pictured, from the Palace kitchen. 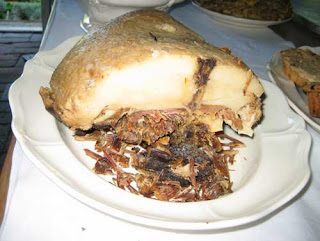 Edwards uses a slightly fatter breed of pig, some are Berkshires, than does the giant, Smithfield Foods, Inc., and is experimenting on returning peanuts back into the pigs’ feed. They focus on quality and sell their products at places like Dean & DeLuca, Balducci’s, and on their website: http://www.virginiatraditions.com/. With the popularity of prosciutto, their new Serrano-style Virginia Ham is aged longer, sliced thin and does not need to be cooked.

There were a variety of recipes to remove some of the salt from the hams before preparing the ham. Some suggest soaking overnight, others recommend placing the hams in pans half filled with water and slowly cooked. Slicing paper thin portions, which also helps cut the salt, makes the ham a perfect and traditional filling for beaten biscuits or small biscuits.

William Byrd of Westover wrote this receipt c1674: “To eat ye Ham in Perfection steep it in Half Milk and Half Water for 36 hours, and then having brought the water to a boil put ye Ham therein and let it simmer, not boil, for 4 to 5 hours according to Size of ye Ham for simmering brings ye salt out and boiling drives it in.” Westover is a grand mansion on the James River west of Williamsburg.