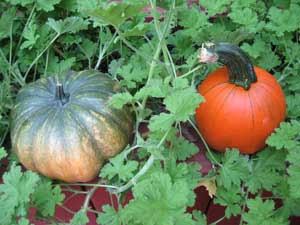 Rose Geranium leaves can be used to flavor jelly, cakes, sugar and other recipes. So too with other scented geraniums.... Nutmeg geranium makes a very nice jelly, as does Ginger.  In 1803...

Thorburn encountered Rose Geraniums, as he recalled in his biography, Forty years' residence in America... the Life of Grant Thorburn, Seedsman, New York, by Himself. Boston: 1834. Also of interest is how his plant seed business started from painting clay pots to sell.

" About this time the ladies of New York were beginning to show their taste for flowers; and it was customary to sell the empty flower-pots in the grocery-stores; these articles also comprised part of my stock. In the fall of the year, when the plants wanted shifting, preparatory to their being placed in the parlour, I was often asked for pots of a handsomer quality, or better make. As above stated, I was looking round for some other means to support my family. All at once it came into my mind to take and paint some of my common flower-pots with green varnish paint, thinking it would better suit the taste of the ladies than the common brickbat coloured ones. I painted two pair, and exposed them in front of my window. I painted six pair; they soon went the same way. Being thus encouraged, I continued painting and selling to good advantage: this was in the fall of 1802.

One day, in the month of April following, I observed a man for the first time selling flower-plants in the Fly Market, which then stood in the foot of Maiden Lane. As I carelessly passed along, I took a leaf, and, rubbing it between my fingers and thumb, asked him what was the name of it. He answered, a rose-geranium. This, as far as I can recollect, was the first time that I ever heard that there was a geranium in the world ; as, before this, I had no taste for, nor paid any attention to plants. I looked a few minutes at the plant, thought it had a pleasant smell, and thought it would look well if removed into one of my green flowerpots, to stand on my counter to draw attention. ... Thinks I, it is strange that a green leaf, plucked from a plant no way similar, should possess all the flavor of the flower plucked from another.

Observe, I did not purchase this plant with the intention of selling it again, but merely to draw attention to my green pots, and let the people see how well the pots looked when the plant was in them. Next day, some one fancied and purchased plant and pot. Next day I went, when the market was nearly over, judging the man would sell cheaper, rather than have the trouble of carrying them over the river, as he lived at Brooklyn, and in those days there were neither steam nor horse-boats. ... thus, from having one plant, in a short time I had fifty. The thing being a novelty, began to draw attention; people carrying their country friends to see the curiosities of the city, would step in to see my plants.

In some of these visits, the strangers would express a wish to have some of these plants, but having so far to go, could not carry them. Then they would ask if I had no seed of such plants ; then, again, others would ask for cabbage, turnip, or radish.seed, &c.These frequent inquiries at length set me to thinking, that if I could get seeds, I would be able to sell them ; but here lay the difficulty, as no one sold seed in New York, no one of the farmers or gardeners saved more than what they wanted for their own use ; there being no market for an overplus. In this dilemma, I told my situation to George Inglis, the man from whom I had always bought the plants in the Fly Market. He said he was now raising seeds, with the intention of selling them next spring along with his plants in the market; but if I would take his seeds, he would quit the market, and stay at home and raise plants and seeds fur me to sell. A bargain was immediately struck; I purchased his stock of seeds, amounting to fifteen dollars; and thus commenced a business on the 17th of September 1805, that already is the most extensive of the sort in the United States."