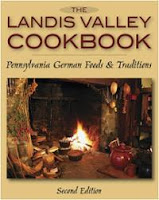 The Landis Valley Cookbook: Pennsylvania German Foods and Traditions is back in print! The first edition in 1999 was terrific, and this is even better. The 2d edition contains over fifteen additional recipes, more of the pictures are in color (88), and the spiral inside the hard binding allows the book to lay flat when in use. ...

Tom Martin is eminently suited to spearhead this second edition, after co-writing the first, and contributing the recipes. He was born and raised in the Lancaster county where his Great Grandfather was a Mennonite Bishop, his Mother and Grandmother excelled at cooking the traditional foods, and he learned to speak Pennsylvania Dutch.

For over twenty years, Tom has been in charge of the foodways department at the museum. His advanced hearth cooking and baking classes, whatever the topic, are extremely popular - with many repeat students, including hearth cooks who have themselves been teaching classes for years. This February’s advanced class involved processing a whole pig, and making ham, scrapple, etc.

Landis Valley Museum reflects a German farming community from 1740-1940. The Landis brothers, Henry and George, started sharing their immense collection with the public in 1925. After their deaths in the mid 1950s, the state took over the museum.

The recipes are delicious. The hot bacon dressing tastes as good as what my Grandmother made for the spring dandelion leaves. The traditional recipes include chicken corn soup, pig stomach, shoofly pie, Buwe Schenkel (filled noodles), Gumbis, Gingerbread, Rye Bread, and instructions for clear toy candy. There are many historical recipes, labeled "Authentic Recipe," some from Landis family and local manuscripts, such as Cider Cake [1862] To Pickle French Beans [Sarah Yeates d.1829] and Yeast from Potatoes [Baer's Almanac, 1848]

Everyone who has taken Tom’s classes will recognize some favorites - the delicate and delicious faschnachts, as well as mush muffins. Tom’s baking is so renowned that during the Fall Festival people wait in line for a sample of his pies and other treats from his bake oven. Wait in line!

The photographs in the book include long time museum volunteers and HFSDV members. Tom was the second President of HFSDV. Peggy Gelnett and Linda Zeigler, members of HFSDV, are also pictured.

Tom Martin’s marvelous modern interpretations of old favorites make this a must have cookbook.